The fourth day – so many things to choose from still! Today is Sunday though and I’m SO thankful it’s still the weekend. I’m thankful these come once a week! For a working pregnant mama during volleyball season, having just this day off of work and Jesse here to help is reason enough for major thankfulness!
Here’s a few things we did this weekend:
Made toilet paper roll “monsters”:

Playing at the park (I promise she had more fun than this looks): 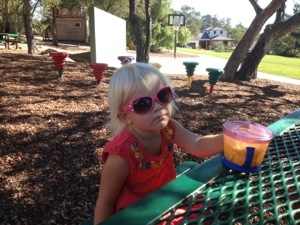 And no picture of it, but we went to the Botanical Garden yesterday too – it was fun to hike, and once we tricked her into finding “hiding spots” along the way, Selah ended up walking a mile or so of it herself.
We also watched two of Daddy’s five sets of Westmont’s match with Biola, during which most of Selah’s time was spent in the lobby/steps running around chasing her friend, Kaden…so I watched from the lobby TVs – a nice addition for those of us accompanied by spectators with low attention spans for the game. 😉
All in all – lots to be thankful for this weekend!