About two weeks ago after Selah’s swim lesson, a little boy was getting his picture taken in the lobby with a new shirt from the swim school. They were making a big deal about him having completed his first unassisted “lap” (25 yards) across the pool. Selah was eyeing the festivities and asked me if she could get a shirt too. I told her she has to swim across the pool to get it – that’s the reward from the swim school.
So, apparently she took it to heart because just two weeks later she accomplished the feat herself as well. We were pretty impressed – not quite 3.5 years old and made it across! We didn’t catch the entire thing on film, but here is about half:
http://www.youtube.com/watch?v=zJMRudhSEzQ
Sweet girl was pretty proud of herself eventually, but really only after she saw how incredibly proud Mommy was! In the moment it kind of just seemed like she did it for the shirt and ribbon. But once it happened, I think she caught on to the excitement we all had and caught the pride of accomplishment bug. 😉 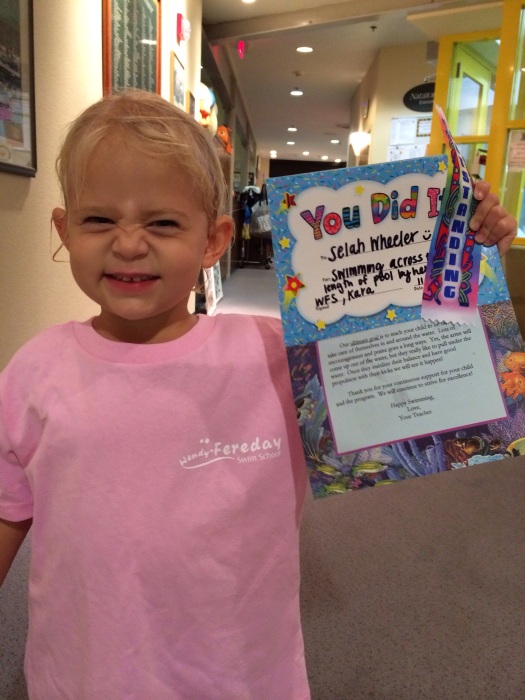 When we got home, Jesse was of course disappointed he missed it in person, so Selah consoled him and said, it’s ok Daddy, I’ll do it again next week and get another shirt…so we had to explain that this “shirt giving” was just a one-time gig – the swimming will be just as special to us in the future, but the prize will not.

I’m clearly overjoyed at her swimming ability, but of course the real excitement is to see my child accomplish a goal successfully and be proud of herself. I’ll be proud of Selah no matter what she does. I’d have been proud if she was learning to put her face in the water, or any level of improvement that came along, of course. (I’m just proud to be her Mommy no matter what!). But seeing her be proud was a different kind of joy. Just that little visible rise of confidence in her own ability to achieve a goal was so sweet. As she grows up I pray she continues to know and believe that she can achieve anything…and I pray I’m able to be her biggest cheerleader too – even on days that there’s no shirt at the end of the pool 😉