The fish named Kitty sure has hung in there with us! Betas must be a petty hearty species of fish, considering we aren’t the most “attentive” owners when it comes to fish…and when we are attentive, I’d go so far as to say we might actually be smothering – in both amounts of food AND “petting” attempts.

Needless to say, Asher is certainly more curious about Kitty than Selah. Any time he is in the vicinity of the window sill that Kitty calls his home, he persistently begs to feed him. I’ve found a fairly good method that consists of ME choosing the amount of food (based on experience with Asher choosing – who thinks Kitty’s appetite is near the level of his own), and letting him put it in the top of the tank.

He also can just barely fit his entire hand through the small opening (clearly intended for depositing food, not shoving a baby hand through)…which means that once he gets it in and commences attempts to touch the fish, it is all I can do to get his hand back out of the hole. This of course creates a dicey situation for Kitty, a not-so-fun task for Mom, and pretty much has no effect on Asher who continues to focus on, “fish? Eat? Food? Eat? Food! Eat!” (I’m fairly certain he wants Kitty to eat from his hand like Mok takes a treat. Clearly more interactive expectations here).

Anyone in our household longer than a good 5 minutes can probably picture the volume, frequency, and persistence level increase.

This morning was no exception, although it started just after Crasher’s new daily morning request to take off his shirt, pants, & diaper. However chaotic the naked fish feeding was, you wouldn’t know it from the pics.
Funny how it’s easier in a moment captured on film to see the childlike wonder and simple awe of a bare bummed baby boy feeding a fish on a counter in the morning sun. 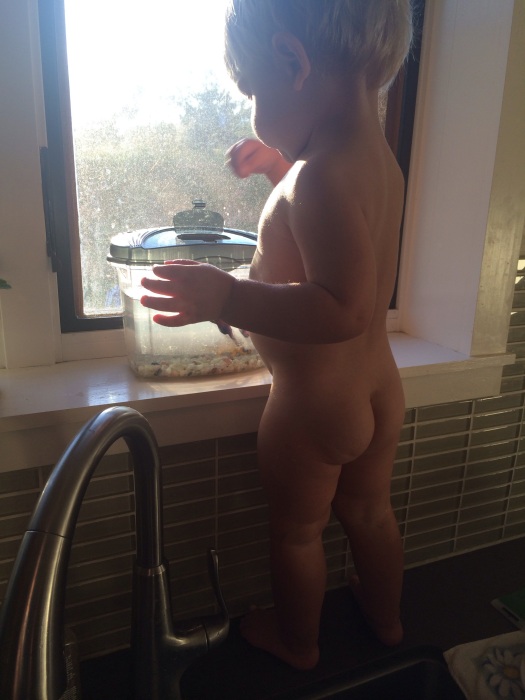 Yes, this right here is the opening I’d like to shove my hand into, Mama! 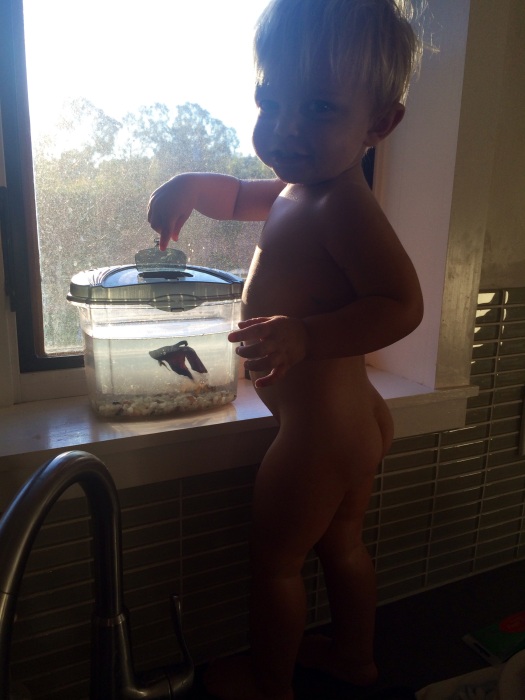 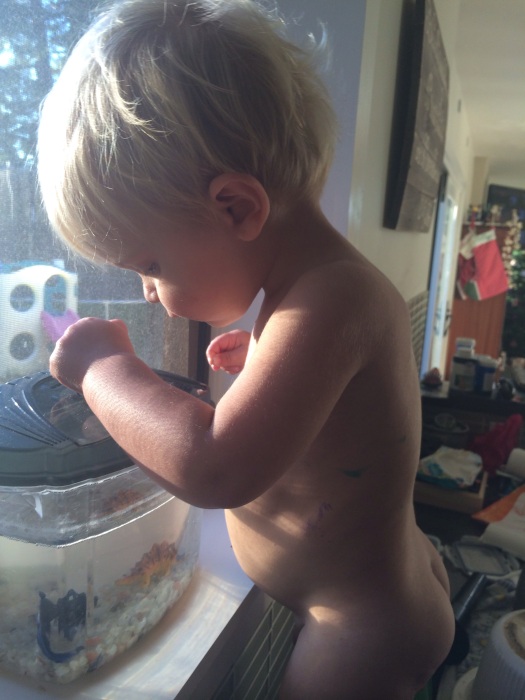 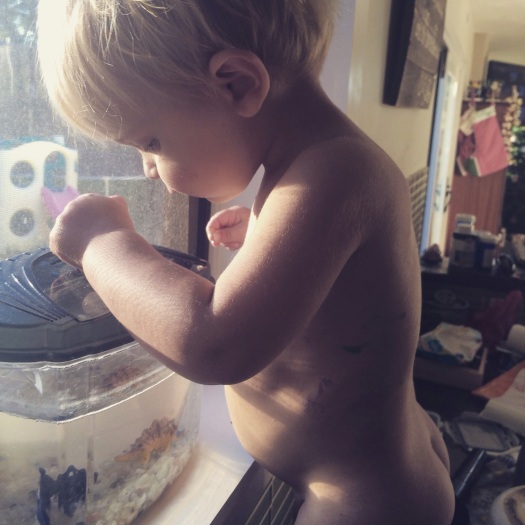 The actual moment was a bit more hectic, ever-so-slightly more dangerous (he’s on a wet counter ledge with me standing behind him, of course, but with maybe-slightly-divided attention between spotting him, snapping the iPhone camera, & dodging drying Christmas crafts), but every bit as cute as the pictures. I also caught a quick video for your viewing pleasure:
http://www.youtube.com/watch?v=5tLquv9H77I
Just thought it was a halfway humorous glimpse of our morning, with a cute baby bum to boot.