I cannot believe that this happened this past weekend:

Selah chose a Rapunzel party and lucky girl has a Grandma who has set a precedent now of making princess dresses for her princess.  So, Rapunzel dress it was!  And I was a sucker for Pinterest and braided all the girls yarn braids to decorate with flowers…but had to rope in Daddy’s ‘native’ lei-making skills to cut all 60 strands per 15 braids, each 9 feet long.  I don’t do math on my days off, but that’s a lot of cutting.  😉.  We think the finished product was a success and certainly was enjoyed by Selah, which is the only important part 😍:
http://www.youtube.com/watch?v=qCKB1sxmzIQ
It was a really nice day, enjoyed in our newly cleared backyard!  It’s not the final product yet, but it is far beyond what it was, and we were thankful that could happen before the party since it was at Selah’s request that we have her special day at home.

The girls had a great time with Rapunzel, and Asher, coming freshly off a Disneyland stint, was feeling confident with his Princess photo skills and took Rapunzel’s hand to show the girls how it was done: 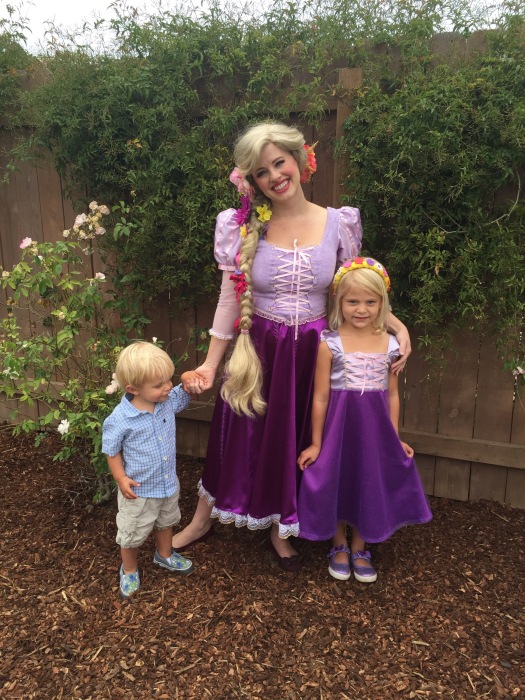 He also refined his princess skill set with the group of girls.  I think this might be one of the better blackmail videos I’ve taken so far.  Pay particular attention to the curtsy.  It’s a multiple watch video too – hard to focus on both Selah and Asher in one viewing 😉:

http://www.youtube.com/watch?v=6AOz650PVqg
The cake could be another whole post.  I will say that Selah (& Mommy) are lucky that Daddy loves us so much.  I’m pretty sure he’d have given up on me if it wasn’t for his daughter, and my visible stress as the first cake attempt failed.  Here is the tower from the movie, that I was attempting to create in cake form:

And the Internet will tell you that making a Rice Krispie tower works great for this, complete with pictures and tutorials.  I loosely based my attempt on these, and created a very inadvertently inappropriate first try that we had to throw away and refuse to post pictures of publicly.  Without going into painful detail, we ended up with this final product that at least stood for the two minutes while we sang:

Clearly it was a leaning tower, but for our last ditch effort and second attempt at 10 PM the night before, it was a success.  And we also made little cupcake cone towers for the kids:

I must give Jesse tons of credit here for staying up with me and carrying out the vision…this was a dual effort to pull off for sure!
The whole party turned out very fun, and we were thankful that Selah has such great friends to celebrate with and enjoyed herself thoroughly.  Here’s an assortment of pictures to round out the memories:

Swords for the ruffians: 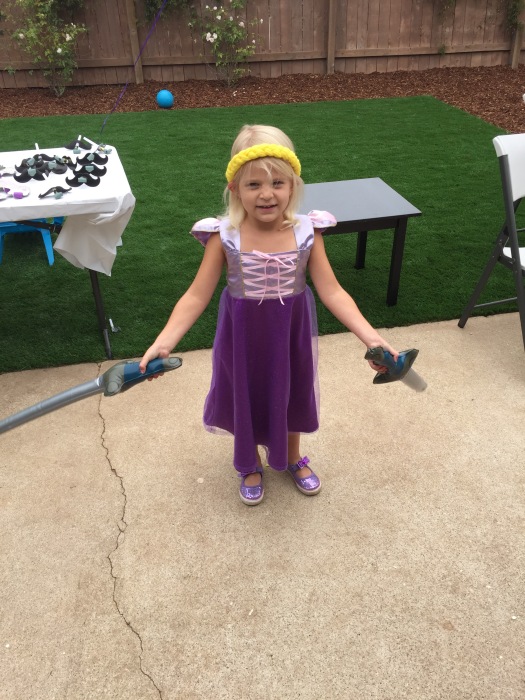 A shot of the hairpieces 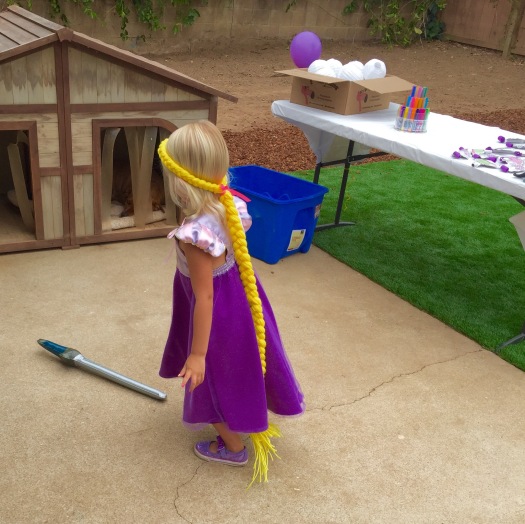 Asher beside himself with what to do with our sweet, beautiful neighbor, Scarlett: 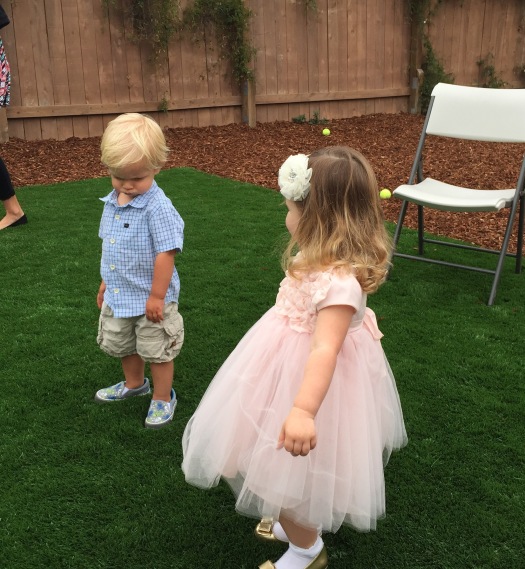 Selah with the girls (more came, but the timing was such that as more guests arrived, i forgot pictures!): 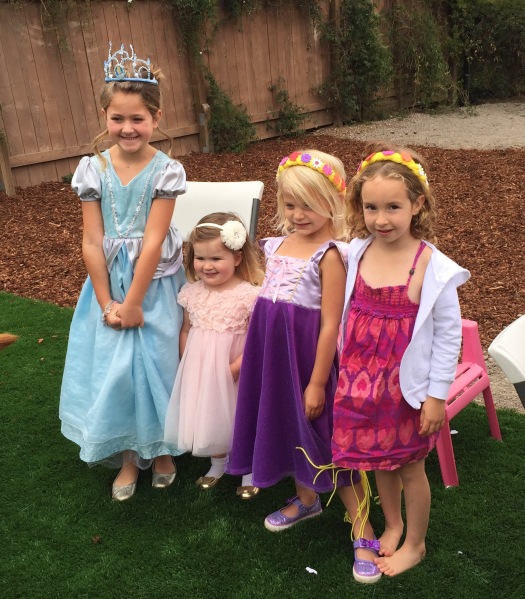 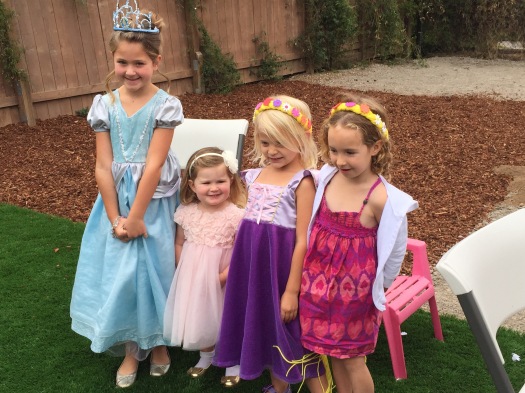 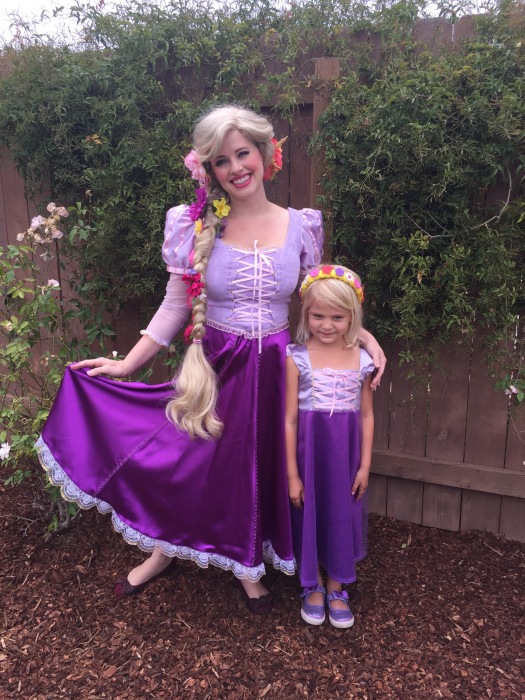 The coronation ceremony (notice Asher is beginning to fade…taking a breather in the grass conveniently in picture range, always infringing on ‘Sissy’):

And finally, Sey with two special Westmont guests, Missy & Ali.  These girls are two of our (& the kids) favorites this past school year (Hannah left big shoes to fill, so these girls have had their work cut out for them to win a spot in the hearts of Selah & Asher!), and were so sweet to come to Selah’s bash: 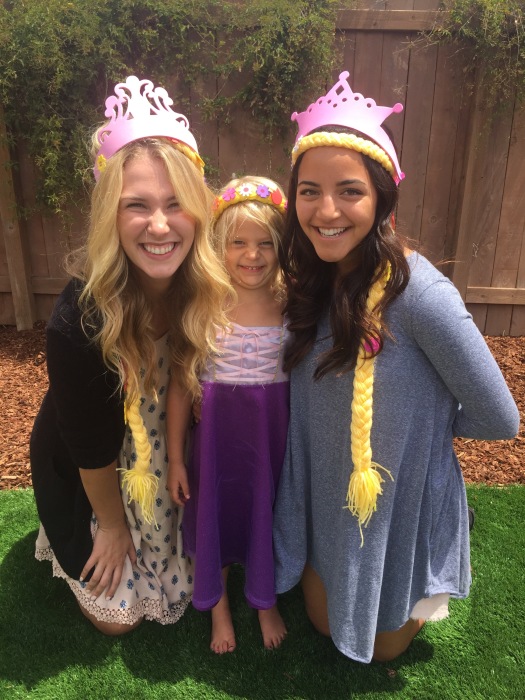 A special day for our special girl.  Can’t believe she’s a whole hand.  Slow down, time!  You’re getting away and I have loving on my babies to do, please!