Selah has started gymnastics and Asher has started soccer.  They both are doing well, but I have to say that Asher’s soccer experience this morning was surprisingly awesome.

He gets frustrated easily with himself so I was preparing him for the worst – I told him that he is just going to practice and that he needed to stick with it, have fun, and keep trying hard because other kids might have a lot more soccer practice (as in, any) than him.  I just wanted him to not be dissapointed in himself – it has happened over and over in swimming and writing, two things he gets very frustrated because his sister outperforms him by so much.  But soccer?  He was actually really impressive!

Here’s a video of his first time kicking a soccer ball: http://www.youtube.com/watch?v=7jzvzS89k9s

We were pleasantly surprised – and so was he!  The absolute best part was seeing how proud of himself he was. 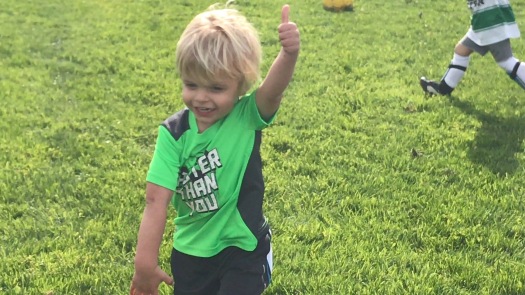 Selah has always been strong and coordinated, so it’s equally as fun watching her (just not as shocking 😉).  She originally only wanted to go because her friend Madeline was going, but she’s now started to enjoy going even when Madeline isn’t going.  She still enjoys piano and singing more (which I know, family, I’ll video next week!), but we might have an athlete yet, and we’re happy that gymnastics keeps her practicing strength and coordination.  Here’s a little video mashup – nothing fancy, but is our scrapbook to compare how the kiddos grow:

The other sport I’ve been meaning to try is biking – I’d like to take Asher to the pump track in town because that kid is crazy on a bike!  It must be the triceratops helmet!  😉